01.10.12
Fflur Wyn shines in this Robin Tebbutt revival of Handelâs oratorio about a Hebrew leader struggling to free his people from Ammonite oppression.

Tebbuttâs production was first directed for Welsh National Opera by Katie Mitchell in 2003. A great dilemma for any director contemplating a revival of somebody elseâs work is when to swim with the currents of fashion and when to paddle against them. The recent trend has been to provide modern settings for work in the repertoire, as if to emphasise or indicate classical insight into contemporary problems. Mitchell and Tebbutt both bravely resisted the temptation to follow the trend and seek modern application in Handelâs classical world. If anything, they actively avoided any possible parallel between the content of Handelâs work and conflict in contemporary Israel, which really would have been courageous staging.

On the other hand, it is likely that Handelâs own audiences in the 1750s and â60s would have felt some kind of affinity with the refusal of the Israelites to be enslaved. After all, Jeptha was composed barely a decade after Rule Britannia, with all its ideological invocations inveighing against the enslavement of Britons and their empire. The plot machinations in Part One whereby Zebul (Alan Ewing) begs his exiled half-brother Jeptha (Robert Murray) to return to Israel and lead the army against the Ammonites are therefore important to a successful performance.

Unfortunately, neither Ewing nor Murray quite pulled it off. Murrayâs performance was competent but he seemed to struggle with the vocal range required of the part; while Ewingâs diction was frustratingly slurred and imprecise. Neither excelled in the acting stakes, and their performances were not enhanced by a setting and costumes that denied them the imposing physical presence you would expect of a heroic leader. Possibly the dissolving of each figure into the chorus of Hebrew citizens was intended to compensate for their individual vocal shortcomings. If so, this is a tactic that largely succeeded. The chorus were on top form, moving in unison when the action demanded and behaving as distinct individuals when appropriate, bringing a necessary element of drama to the performance. 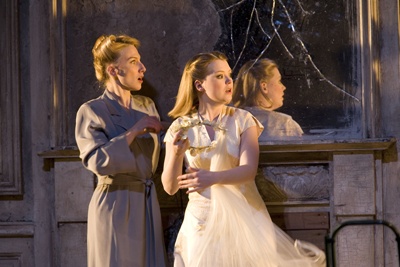 The plot pivots on Jepthaâs rash promise that if he is victorious in battle he will sacrifice to God the first person he meets on his return home â and this turns out to be his daughter, Iphis. Cue potentially tragic scenes between Fflur Wynâs Iphis and her lover Hamor (Robin Blaze). These were the scenes in which the performance was on surest ground. Blaze has been acknowledged as one of the leading contemporary performers of Baroque music in the world. His counter-tenor voice drew attention to his characterâs youth in contrast to the political seniors Jeptha and Zebul. His fluid vocal range expressed yearning, hope, fear and dreams all together. The love scene between Blazeâs Hamor and Wynnâs Iphis in Part One created a magical atmosphere that held the audience spellbound.

Diana Montague acquitted herself well in the relatively unglamorous role of Iphisâs mother StorgÃ©. Her acting performance enabled her to relate to Murrayâs Jeptha on both levels of wife and political advisor, a combination of roles that she demonstrated best in the scene where her nightmare foresees both military success and personal disaster.

And if Montague succeeded in combining the twin roles of wife and colleague, Wynnâs Iphis was all the more successful for combining the three facets of daughter, lover and sacrificial lamb. So while the Hebrew council frantically debated whether or not Jeptha could be released from his oath in Part Three, she made her way down a long staircase to offer herself up for sacrifice with a poise and presence that again transcended the daily business and confusion on stage. In this she was ably supported by a train of trilling handmaids played by members of the company.

One of the risks in staging a baroque opera is that too many trills or too frequent repetition of the same refrains can come across as a parody of the art form as a whole, or even as unintentionally comic. Ewing and Murrayâs joint inability to hit all of the highest notes may have had the unwitting benefit of averting potential failure on these grounds, but there were other obstacles to surmount. Claire Ormshawâs messenger Angel strutted about the stage with a bearing and costume quite incongruous with the otherwise realist setting. Her performance was not at all bad in itself, but the manner of her direction seemed to draw attention to Handelâs meagre plot.

Similarly, the scene in Part Three where Fflur Wynâs Iphis was bound and gagged in preparation for her ritual sacrifice more closely resembled a game of blind manâs buff than a sacred rite. The Israelite leaders seemed unable to decide what to do with her next, all wrapped up with nowhere to go...

But Wynn had the last laugh. Set free by Ormshawâs pardoning Angel she ascended the stairs to the top of the stage, both literally and metaphorically climbing above the rest of the cast to confirm her status as one of Welsh operaâs rising stars.

Go to www.wno.org.uk/whats-on to see availability for tickets and theatres. Jeptha runs until 27 November.