'I Do Not Know Whether God Made Me'
From Planet 223

Steve Gough revives the voices of Welsh child miners whose testimonies of exploitation contributed to a landmark piece of Victorian social reform. Was this the first and last time children's voices in Wales were heeded so extensively?

One evening in September 1841 at the Brace Colliery near Llanelli a pale, stunted young teenager, John Williams, was accosted in the twilight by two frock-coated strangers as he emerged covered in coal dust from the pithead at the end of his dayâs twelve-hour shift. He was taken to the colliery office where, to his astonishment, he was questioned in detail about his daily pit experience, and his answers faithfully recorded:

I cart coal in the Golden Vein. The place is low and I creep on my hands and knees and often on my belly, I draw with a trace and chain. Another boy (Henry Green) carts with me in the same place. The vein pitches and the place is steep and we have a chain through a block at the top and one goes up when the other goes down. We fill and empty carts as well as draw them. It is hard work and sometimes we have little time to eat our bread and cheese. We eat mostly barley bread. We cart about 40 carts which make 20 baskets in a day and get 24s. per month eachâ¦
â¦I take my shoes off when I go to work and work barefoot. I sometimes get wet as the top of the place is wet and I wet my back by rubbing on it. We go down at six oâclock in the morning, over the ladders. It was difficult to go over the ladders at first but they are not long in coming to it. We all come up in the baskets every night... 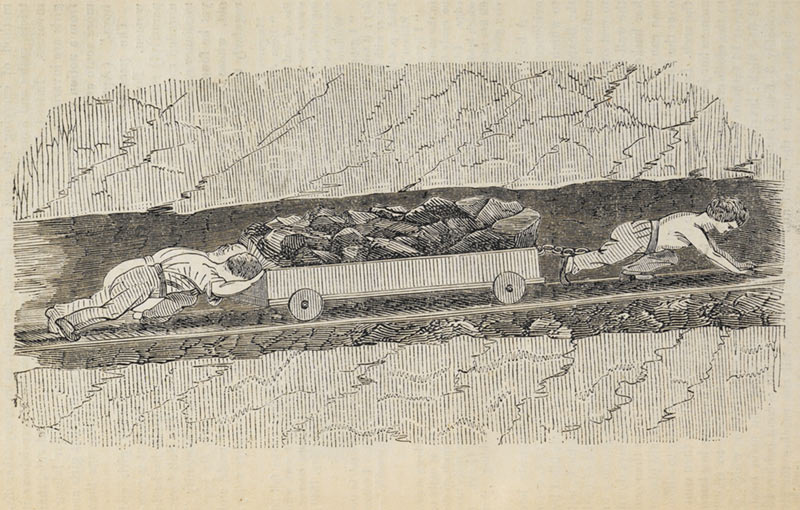 All images accessed at http://www.bl.uk/collection-items/report-on-child-labour-1842 (illustrative engravings from the report).

Steve Gough is is a Welsh author and screenwriter who has twice won BAFTA Walesâs Best Drama Award. Steve is currently working with the documentarist Joram ten Brink on a drama documentary based on the experiences of child miners in Wales, as revealed in the 1842 Commissionersâ reports.