Reviewed: A Detested Occupation? &
Votes for Women
From Planet 223 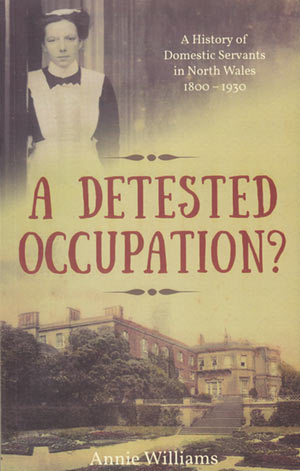 I emitted a silent scream when I saw the title of A Detested Occupation? Let me explain: I recently published a fact-based novel about a Welsh domestic servant from Dolgellau who was sentenced to transportation to Botany Bay in 1833, and I spent ten years writing and researching the damn thing. Why, oh why couldnât this have been written sooner? It would have saved me so much time and frustration. As Annie Williams states, trying to find information about the lives of female servants in the 19th century is difficult. Despite the fact that âFrom 1871 to 1901, domestic service accounted for over half the total number of women employed in Walesâ, historians âneglected the subject because matters of a âdomesticâ nature concerning women were not regarded as being historically significantâ. Material concerning women from Wales is even harder to come by, but Williams has managed to put together a detailed account of the lives of female servants in north Wales.

Bethan Gwanas from Dolgellau used to teach French and outdoor activities, but has been writing Welsh-language novels for adults, teenagers and Welsh learners since 1997. She cycles and tends her garden between paragraphs.