Reflections from the Wales Coast Path: Penrhyndeudraeth to Harlech 17.05.19

Inspired by Planetâs Retracing Wales series of creative responses to the coast path, Cardiff University student Elizabeth Facer reflects back on an intriguing island on the estuary just below her hometown, and how its identity crisis mirrors her ownâ¦

Creative responses by students from the School of English, Communication and Philosophy (ENCAP) at Cardiff University, commissioned and published as part of our sponsorship partnership with ENCAP 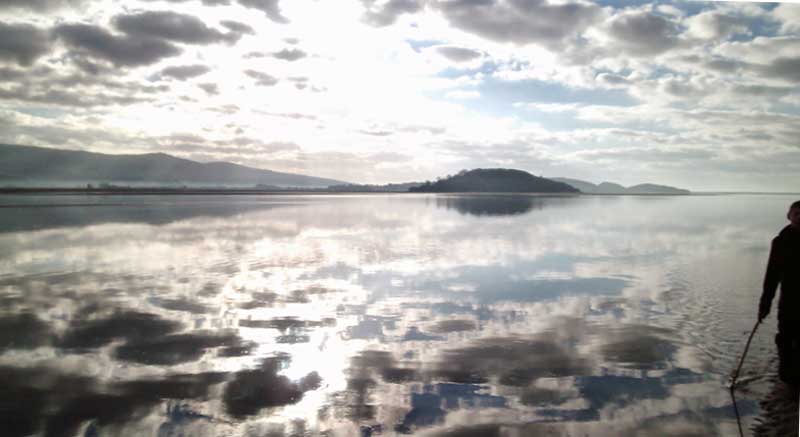 I never know what to say when people ask where Iâm from. Do I say where I was born? Where I was raised? Stumped for an answer, I opt for the funny response. Imagine the map of Wales is a person. This sometimes takes a bit of miming, but once they have the image I roll out the punchline: I grew up in the armpit.

One of my favourite spots for escaping was the patch of estuary below my house. Here, all was smothered in the soft haze from the farmers burning heather on the hillsides. The muddy river meandered from Pont Briwet, kissing Ynys Gifftan lightly on the forehead before turning to favour Portmeirion on its stroll to the sea. With barely a house in sight, the remains of Harlech Castle stood out like an upside-down cow on the horizon. It was easy to imagine this spot untouched for centuries.

The old folk repeatedly tried to scare us away from the estuary with stories of gypsies and thieves. Years later, my primary school told us about those who had died crossing from one side to the other. In a draughty church overlooking the estuary, a dusty ledger held the names of the drowned in intricate black ink. The places they had drowned wouldnât even appear in a Google search. There were only local names that few now remember.

That was the real reason we were told these stories. There arenât the jagged rocks that naturally warn people. This place doesnât scream danger, it sings it. It will lull you into thinking you can make it the whole way across, yet, despite appearances, there will always be hidden currents that will drag you under.

In the middle of the estuary sits Ynys Gifftan, which has been uninhabited since the sixties. It was as far as we dared walk, and we brought extra provisions should the tide rise again. We were dripping wet and freezing when we arrived, and to our surprise, we werenât alone.

A dog walker from the other side was doing a quick lap around the island before returning. I found two things strange about this: the first was that her dog was wearing purple eyeshadow, and the second was that I had expected my island to be empty. She told us about the family that once lived on the island. One tenant would hitch her skirts and wade across to work on the mainland. From there, my secret island began to fill up, and the more questions I asked, the more I found that everyone seemed eager to tell a story about it.

âMy husband used to go for lunch with the owner, Frank,â one woman said, âheâd be happy to meet you if he hadnât have died three years agoâ.

When âFrankâ â Baron Francis Ormsby-Gore â died, many of the familyâs possessions were sold to refurbish their historical home in Talsarnau. This sale, however, excluded their island. The island was gifted to an ancestor of Lord Harlech by Queen Anne, and it was given on the condition that he could never sell it. I first wondered what he had done to receive such a gift, and why she had given such a specific condition. From there I gradually thought more about what this seriously meant.

Land is fundamental to Wales. The national anthem centres around it, and many local people would profess a profound love for it after a pint or two. With this in mind, the notion of gifting an island felt bizarre. Did she pluck it out of thin air? Did it come gift-wrapped? Jokes aside, the stable connotations of land and the flimsy connotations of a gift together felt like a paradox.

The island referred to as Skysen island in sixteenth- and seventeenth-century maps, eventually stopped being named in eighteenth-century maps. It was almost as though it were going through an identity crisis, only to come out the other end in the nineteenth-century as Ynys Gifftan. This name to honour the queen gave the island a whole new identity, juggling the Welsh and English.

I strangely empathised with the identity crisis of Ynys Gifftan. I moved to Wales as a five-year-old and learned Welsh almost immediately at the village school, but despite my efforts, I could never shake the feeling of being an outsider. The villagers seemed more deeply rooted here than the forests encircling them. The local stories they told had me fascinated, but also made me wonder where I slotted into it all. In Wales I was âthe English girlâ, and in England I was told I was âso Welshâ. I was stuck in the cracks â feeling neither Welsh nor English, but still equally both. I didnât fit inside this secluded bubble, but I also couldnât exist outside of it.

The biggest change came when I dug deeper. The more I discovered, the less secluded it became. Frankâs father, Baron David Ormsby-Gore, had been ambassador to the United States, and was close friends with the Kennedy family. Frankâs sisters, Alice and Jane, mingled with the likes of Eric Clapton and Mick Jagger. Each story pushed the boundaries of this bubble further, until I found that my tiny stretch of coastal path was more tightly bound to the outside world than I could ever have imagined. Here, I realised that nothing exists in isolation.

This truth applies just as much to the landscape as it does to people. Identity is like a ball of wool: a thread will trail behind you and pick up stories, people, and places wherever you go. The eighteenth-century name change doesnât change the fact that Ynys Gifftan is still a Welsh island in the middle of the Dwyryd Estuary. Birth place or accent doesnât change the fact that I am still a woman living in Wales. Equally this wonât stand in isolation from other aspects of my identity. Like the island, you might have different names, stories, and people surrounding you. That doesnât weaken your identity. It gives you a choice, and from there itâs up to you what you choose to do with it.