Review: The Tradition
From Planet 223 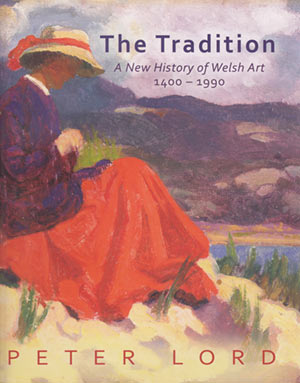 This is a remarkable and important book. One would expect no less from Peter Lord who has devoted his career to advocating the visual culture of Wales. In presenting a history of Welsh art in one accessible volume, the author has succeeded both from an academic standpoint and from the point of view of the general reader. This is a thought-provoking book and its content both verbal and visual is given the high design and production values that it merits. In short, it is a book that will stand the test of time.

The Tradition begins with a consideration of 15th-century art, and this is given telling political context by the fact that at the beginning of that century Wales was still engaged in rebellion against the English crown, a situation that was only resolved towards the end of the century with the accession of the Welsh Henry Tudor to the English throne. A beautifully reproduced full-page image of stained glass from the church of St Cadwaladr in Llangadwaladr in Anglesey, gives some idea of the quality of Welsh work in the late 15th century.

Peter Lord points out that the accession of the Tudors to the English crown was a psychological boost to Wales, and such cultural confidence gives context to the work discussed in the early part of his book, developing from stained glass and mural painting into a post-Reformation tradition of portraiture in which the character of the individual was more valued than his or her piety.

Murdo Macdonald is Professor of History of Scottish Art at the University of Dundee. He is a former editor of Edinburgh Review. He is an honorary member of the Royal Scottish Academy and an honorary fellow of the Association for Scottish Literary Studies.