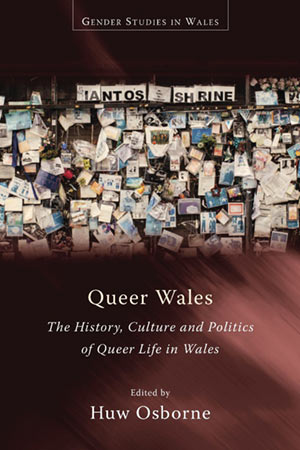 Pick up any book on lesbian, gay, bisexual or transgender (LGBT) history and youâll rarely find Wales even mentioned. Yet for a history which has for the most part been legally forbidden and socially unacceptable, there is a huge amount of books. Search for âgay historyâ books on Amazon and youâll get over 19,000 results. But our history has long been subsumed into the wider meme of âfor Wales see Englandâ, which is particularly frustrating when you consider the huge contributions people from Wales have made to LGBT history. It is therefore refreshing to see a book dedicated entirely to Queer Wales.

There is a wealth of stories to be exhumed. We meet fascinating characters such as Cranogwen (the bardic name of Sarah Jane Rees of Llangrannog) and George Powell of Nanteos, examined by Jane Aaron and Harry Heuser respectively. Mihangel Morganâs discussion on Welsh-language literature clearly shows how difficult but how important it is for more work to be done in this area. And Kirsti Bohata sets the benchmark on a long overdue study by providing âthe most comprehensive survey of lesbian representation in Welsh literature to dateâ.

Much of the book consists of literary reviews, which sits somewhat uneasily with its subtitle of âThe history... of Queer Life in Walesâ, as much of the material lacks the wider context of LGBT history. For example Aaron refers to Cranogwenâs âunusual careerâ both as a sailor and navigator and an editor of a magazine, while editor Huw Osbourne refers to her as âprofoundly unconventionalâ. But this is only true when considering her simply as a woman. In the late 19th century there were hundreds of women who were professional sailors, soldiers and labourers, as well as those who both courted and married women. The difference between them and Cranogwen is that they became transvestites or were transgender.

Norena Shopland specialises in the LGBT heritage of Wales. She organised the two largest Welsh exhibitions and regularly gives talks and workshops on the subject. She is currently writing Forbidden Lives, a book about people and events in Welsh LGBT history, to be published by Seren in 2017.