Creative responses to Planet magazine by students from the School of English, Communication and Philosophy at Cardiff University

In the piece below, third-year undergraduate Kevin Hudson responds to âRetracing Walesâ, our series of creative responses to the Wales Coast Path, which go astray from the usual tourism and heritage script. For more information about our series see our excerpts pages

For more information about courses at ENCAP click here.

When I first visited Barry it was at night. Driving the short journey from Cardiff, Iâd assumed Barry Island was the playground of the city dwellers; the sandbox for stressed businessmen to scrunch their toes in; the sunbed for dead-eyed mothers and their aching feet; a paddling pool for uninhibited students. Being a student myself I think the idea rather appealed to me. However, as I pulled up overlooking the beachfront I felt a gush of wind rock my car from side to side, as if the sea itself was telling me to buck up my ideas. I pulled on my jacket and stepped out of the car. Another wave of cold air swept across my face like a slap, leaving a salty handprint across my cheek and tears in the corners of my eyes. To my left a towering frame of metal jutted menacingly out of the pleasure park and teetered in the shadows. To my right the empty promenade stretched away into darkness. I moved forward to the railings and clung to them like a limpet in a storm, taking in the stretch of moonlit sea before me. It rumbled with a prehistoric roar that, for a moment, even drowned out the whistling of the wind in my ears.

To me, growing up in the middle of England, the sea was summer, the beach was sandcastles, the coast was holidays. To stand in the coldness of a coastal winter night then, and hear the growl of an angry, storm-driven sea was unnerving, and being the only soul on the seafront I couldnât help feeling personally victimised. The way the waves hungrily devoured the sand and crept ever closer to my numb feet, the foaming mouth which snarled as it smashed onto the sand, and the glassy stare of the dark water glaring at me, all making me certain I was being warned.

This ainât no holiday camp, this hereâs nature. Just you try paddling in here now.

This ainât no sunbed Ì¶ feel that sting of salt on your skin.

This ainât no playground butt! This is Barry. 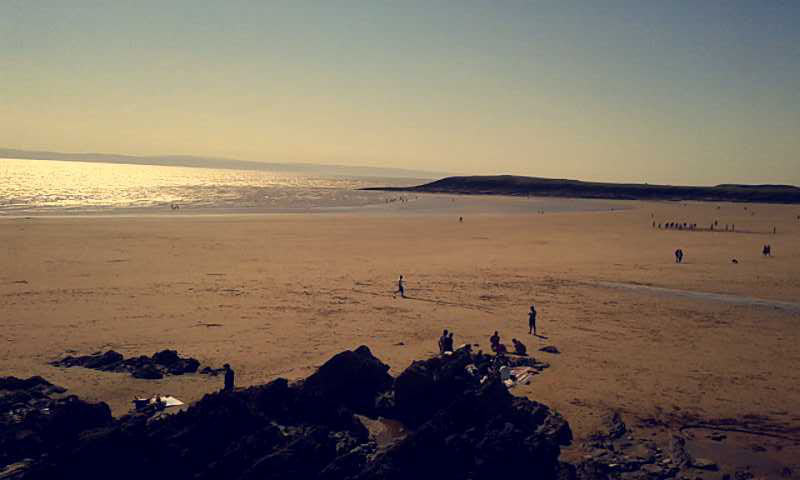 As if to prove a point at that very moment I heard a thud on my head and felt a wetness oozing down my forehead. I put my hand out to feel for rain but as I did I caught a glimpse of white and heard the beat of wings disappearing above me. I touched my forehead hesitantly and felt a sticky puddle. The wind carried off my curse as I set about wiping up the mess with a tatty tissue dredged up from my pocket. I was in the process of cleaning when a red handkerchief was thrust towards me.

âBuggers are always getting me. I could swear you hear them laughing sometimes.â His voice had a knack of slicing through the noise of the wind and waves and ringing out loudly. He was clearly a friend of the sea.

âWouldnât have thought they could fly straight in this,â I said, removing the last remnants of seagull poo from my head. âIs it always this rough?â

He chuckled, taking back his handkerchief and sliding it into his pocket. âThis is tea-party weather lad,â he smiled, âYou wanna see her when sheâs really angry.â

âAye and imagine being out there, on the waves themselves, your boat being tossed about like it were seaweed.â

I couldnât imagine. My legs were struggling to hold me up as it was, here against the gale. Perhaps he noticed this as he nodded his head towards the small building on the promenade and ducked behind it. I followed eagerly and breathed a sigh of relief as the ringing in my ears eased off. From the small, closed hatch and the large menu sign screwed into the wall I gathered the small building was a cafÃ©. The man had taken a seat on the step of the doorway and I joined him. âSo youâve been out there on a boat?â I asked in genuine awe.

He gave an amused smile through his beard before he replied. I could hear him even clearer now, and noticed how he spoke in a rhythm which seemed to mimic the sea. âOnce or twice, but nothing like my Dad Ì¶ he was on the coal ships. When one of them starts rocking you know about it! Back then Barry was the largest coal exporting port in the world. Ê¼Course that meant there was more than a few wrecks. My Dad was on a boat when it was driven ashore up at Rhoose Point, had to ditch half its cargo before it could sail again. Folks couldnât believe their luck Ì¶ they filled their coal stores for months!â He chuckled again, shaking his head gently in that disbelieving, nostalgic way.

âYou grew up here then?â The thought of someone living at the beach had always intrigued me. Didnât it ever get tiresome?

âYes, lived here all my life. I can still remember being a nipper and watching the long, snakes of steam engines carrying coal here from all over south Wales, and then sending it off across the water in big stately ships. It was a clockwork operation: chugging and churning, smoking and spurting, on and on as if it would never stop. Ê¼Course it did in the end. Dad was an old man by then though. I remember walking through the scrap yard down at the docks where all the old steam engines were lined up and waiting to be scrapped. It didnât make me feel sad like it did some other folks. I liked walking between those silent giants, touching their grubby, black bodies, warmed by the sun and scuffed by the wind. Somehow they reminded me of my Dad and the other old men down at the pub, sitting in lines across the benches, their bulky arms and tough-skinned hands telling the tale of their days in the docks. I never told Dad that. Heâd of told me not to be daft. He wasnât a nostalgic man, my Dad; he knew things had to change and wasnât afraid of it. He wasnât afraid of anything, or so it seemed back then. Only time I ever saw him cry was at my wedding, and even then I think it was more the whisky talking than himself.â

Heâd taken his hat off now and his thinning grey hair swayed gently in the sheltered breeze, backwards and forwards like a wave. He held his hat in his hand and stared down at it, finding memories in all of its creases and loose threads.

âYouâre married?â I asked, finding myself more and more intrigued by this stranger by the sea.

âI was. No longer with us now. She was a good one too. Came here from Manchester to work at the holiday park back in the Ê¼70s Ì¶ Never had a lungful of sea air in her life! Thatâs how I got her to talk to me; I said Iâd show her the beach. We must have walked up and down it seventeen times that day, and not a momentâs silence between us. We were married a month later.â

âSomething like that.â He studied his hat some more. A distant look was in his dark eyes, as deep and tumultuous as the water which washed up and down behind us. After a moment his eyes snapped back into focus and he slapped his hat back on his head, jumping to his feet. âLook at me now, chewing your ear off, you probably came here looking for a bit of peace and quiet to think. Well I canât promise youâll get much peace and quiet here tonight but itâs a perfect spot for thinking. Enjoy your night lad.â

He backed away with a nod and without another word strode into the darkness, disappearing surprisingly fast in the sea mist. I sat there for a few minutes longer and listened to the sea; it had calmed somewhat and the breaking waves now sounded like whispers from the sea to the shore Ì¶ some loverâs message carried across the waves maybe, or some timeless secret which I could not decode. I drove back to Cardiff thinking of the old man and his life spent with the sea. The changes theyâd watched together and the secrets they shared.

That summer I went back to Barry, walking the whole circuit of Barry Island on the coastal path. As the familiar stretch of sea and sand came into view, this time sparkling under the midday sun and peppered with sunbathers and paddling children, I couldnât help wandering what it might have looked like fifty years earlier Ì¶ I saw red-coated guides from the holiday park leading a gaggle of children in a game of cricket, a large spinning wheel extending high into the sky at the pleasure park, casting dancing shadows across the promenade and delighted screams across the sea, wide-eyed children seeing the sea for the first time, and the old man and his wife as a young couple walking up and down the beach Ì¶ or how it would have been a hundred years earlier, with plumes of smoke billowing up from the steam engines coming to rest at the docks, and grand looking ships disappearing out to sea with the old manâs Dad proudly on board. Even those distant days of primitive ancestors seemed like a recent memory, where barefooted children would be scavenging in the rock pools, dropping a flint tool into a boggy puddle where it would be fished out thousands of years later by another excited child and his plastic net. It was almost strange to look down now and see the digital cameras snapping pictures of sandcastles, and the modern looking promenade with its brightly coloured beach huts. The sea was still lapping though, relentlessly and endlessly, swallowing up stories so that one lonely night it can tell its tales again and whisper to the shore.

Kevin Hudson is a third-year student at Cardiff university. He is studying English Literature and Journalism.