Creative responses by students from the
School of Journalism, Media and Cultural Studies

Maria Aguadoâs father is from Andalusia and she lived in Barcelona for many years. She draws on her experience of Iberian cuisine to explore the food cultures of people from Spain living in Cardiff. She reflects on how food becomes particularly meaningful when living a long way from home, especially in times of insecurity, such as the lead up to Brexit and the anxiety this causes for EU nationals.

Food evokes a sense of place like no other aspect of our lives. The smell, taste, and texture of a dish can instantly transport us to when and where we last ate it. Special foods add meaning to holidays and preparing them can become the most meaningful way we preserve our traditions. Simpler dishes remind us of home and who we are.

Spain is a country of contrasts and differences. For example, some people from Catalonia in Cardiff will identify as Catalan, some as Spanish. These affiliations will be felt with varying degrees of strength, and have become particularly charged due to the referendum in Catalonia on independence and its aftermath. However, culture in Spain, whether you see Spain as one nation, or a state made up of many nations, is united by the importance it gives to food in everyday life. Enjoyment of a meal depends as much on the quality and freshness of each ingredient as it does the skill of the cook. Communal mealtimes can be hours-long affairs, each course being drawn out by conversation and wine. Many good Spaniards go to their mothersâ homes most Sundays for dinner, a ritual that can consume the entire day, well into adulthood.

When they move overseas, people often miss food above everything else left behind. And itâs the everyday foods, rather than elaborate special occasion dishes, that remind them of home. Jordi SÃ¡nchez, 45, from Barcelona in Catalonia, is an Occupational Therapist and has lived in Cardiff for nearly 18 years. When he thinks of home, itâs potajes, the thick stews traditionally cooked over low heat all day long, that come to mind. âFor example, the ones with chickpeas, lentils, or potatoes and a bit of salt pork cooked with a base of tomato, onion, peppers and garlic,â he says.

A particular favourite he mentions is cocido, the combination of chickpeas, vegetables and different types of sausages cooked with a ham bone that many food scholars believe has its roots â without the pork â in Jewish Sabbath meals, which had to be started before sundown on Fridays and left to slowly cook without being touched until the following day. Jordi was at boarding school as a child, and these types of dishes were served most days. He says, âYou ate one kind or other almost every day, except Thursdays it was paella, and chicken on Sundays. Itâs probably changed nowadays, but thatâs what I remember.â 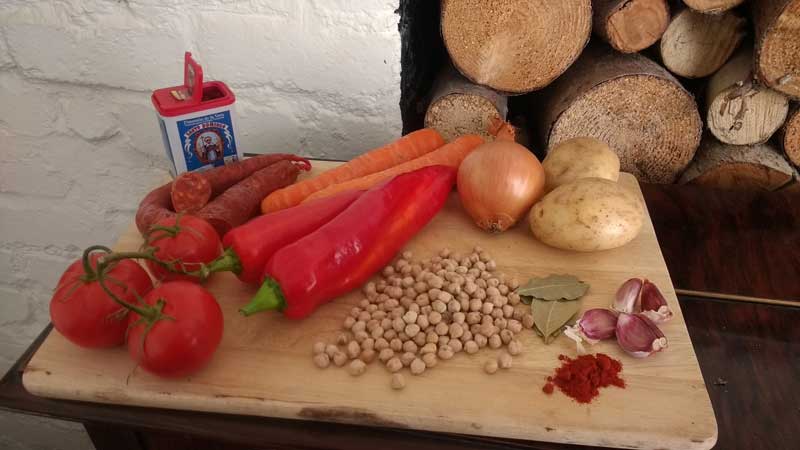 Two Catalan dishes that Jordi mentions are esqueixada de bacallÃ , a salad of shredded salt cod, tomatoes, and black olives dressed with olive oil and vinegar, and samfaina, similar to a ratatouille, containing aubergine, tomato, onion and green pepper that are slow cooked into a thick sauce that can be served with any type of meat or fish, but is most often served over chicken.

He also remembers special treats made at school to celebrate All Saintsâ Day. âWe kids would go out and collect chestnuts from the trees to roast for the castanyada,â he says. They would also make panellets, small sweets made of ground almonds mixed with sugar and a little potato then rolled in pine nuts and baked.

Javi Somavilla is originally from GijÃ³n in the Asturias region and has lived in Cardiff for the past four years, with a previous four in Scotland. He works as a sous chef at a four-star hotel in the city centre. A dish he remembers with particular fondness is fabada, an Asturian white bean stew made with chorizo, salt pork, and the blood sausage morcilla. âIt seems incredible that people here in Wales donât eat this type of thing,â he says.

He also recalls going to his grandparentsâ home for the large Sunday dinner that in Spanish families often stretches from mid-afternoon to early evening due to the ritual of the sobremesa, conversation had over a shared meal. âMy grandmother would be in the kitchen all day cooking,â he remembers. Some of his favourite dishes she made were salt cod, almond and apple tart, and requesÃ³n, a fresh white cheese.

Spain is made up of distinctive cultures, each with its own strong culinary tradition, and Spaniards overseas particularly miss the foods of their own communities. Spanish teacher Nacho Pascual, 50 and another Barcelona native, has lived in Wales for three and a half years. The foods he most associates with home are botifarra, a spicy white pork sausage which is traditionally served with mongetes, large white garlicky beans, and the rustic bread called pÃ  de pagÃ¨s served topped with crushed tomato, garlic, olive oil, and cured ham. 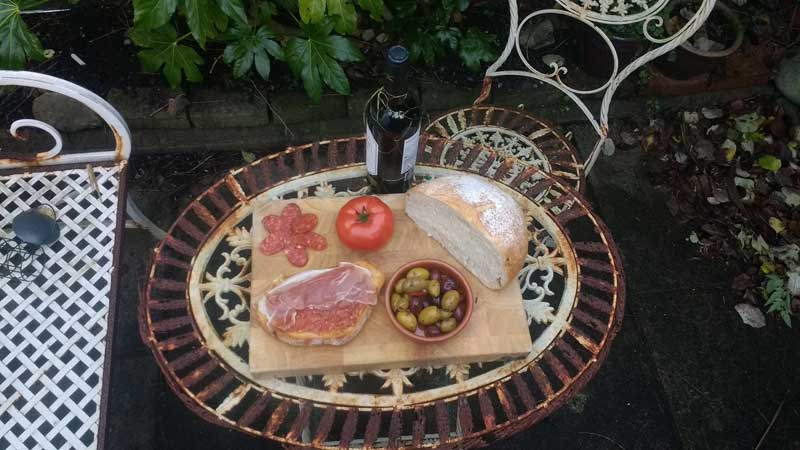 âThereâs a dessert I really connect to my past thatâs called torrijas,â he says. âIt makes me remember my childhood.â His grandmother used to live with his family, and torrijas were one of her specialities. Similar to French toast, theyâre made of bread soaked in milk and egg, then fried and dusted in cinnamon and sugar. Nachoâs grandmother also made meringues, and he says he now makes both these sweets for himself.

Josep Gomis, 40, is from Tarragona in southern Catalonia. Heâs a teacher and has been in Cardiff since 2007. He loves to cook and often makes Catalan dishes, such as espinacs a la catalana, spinach sautÃ©ed in garlic and olive oil with raisins and pine nuts, and fideuÃ , which is basically a paella made with very thin noodles rather than rice. When he goes back to Catalonia for visits, he brings back a variety of tinned foods and charcuterie. He laughs, âEvery time I go to Spain, I return with my suitcase full of food.â 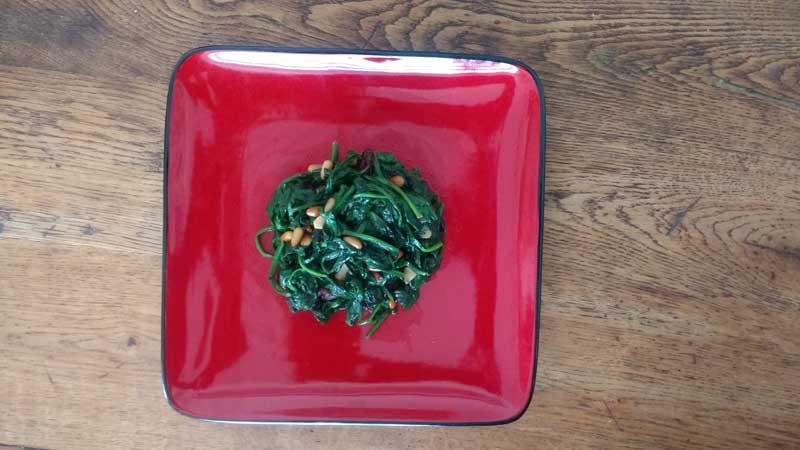 Asked if thereâs anything he misses but canât find in Wales, he says, âThe foods I need are available, the meat here is really good. Fresh items are a bit harder, but you just have to put in some effort.â

The others agree that cooking their own foods in Wales is easy for the most part. There are a few ingredients that prove elusive, however. They all note the limited selection of fresh fish and seafood available. âThere are some things that you donât find in restaurants here, like snails or octopus,â Jordi says. Josep is frustrated at the difficulty of finding good rabbit, a Catalan favourite. âHere, most people see rabbits as pets, and itâs rare to use them as food,â he notes. âYou can sometimes find them from China or as game meat, but those have a really strong taste.â

All four men have a passion for food. They speak about the dishes they most associate with Spain with an obvious delight in discussing each ingredient and describing their preparation. Theyâre also very aware of the emotional links to their origins that cooking these dishes themselves provide. Josep says quite simply, âIn Spain, food is important. It matters to people.â

Well-known both within and outside of Spainâs borders, the tortilla de patata, also known as tortilla espaÃ±ola, is one of the countryâs most popular dishes. A simple fusion of egg, potato, and onion, its ingredients are inexpensive and readily available in most places, making it an easy dish to replicate.

Before Jordi moved to Wales, he spent nearly ten years working in a busy bar in the centre of Barcelona. He helped with food preparation, and learned to make a variety of tortillas, including the classic potato version. He stresses that you shouldnât be tempted to finish the tortilla off in the oven, as many English-language cookbooks suggest, as baking in the oven gives a different consistency to the eggs than cooking them in a pan will. To get an authentic final product, please grab a plate and flip.

Peel the potatoes and cut into 1cm chunks. Peel and dice the onion. In a 15cm pan, heat abundant oil over medium-low heat. Add the potatoes and onions, and add salt to taste. Cook on fairly low heat until the onions are transparent and the potatoes can be easily pierced with a fork. Do not allow to brown. Remove from heat and let cool slightly.

In a large bowl, beat the eggs with a little bit of salt. Add the potatoes and onions. Do not mix too well or the egg will begin to set. Add more oil to the pan and when hot, pour in the egg mixture. Cover and cook over low heat. When the edges of the tortilla are set and begin to pull away from the side of the pan, take a fork and move gently aside to see if the bottom has also set. The centre will still be fairly liquid.

Take a flat plate and place over the tortilla. Flip the pan and remove. Your tortilla should be on the plate, cooked side up. Place the pan back on the heat, add a bit more oil, and gently slide the tortilla back into the pan. Let cook, uncovered, until done.

Serve with crusty bread and a salad. 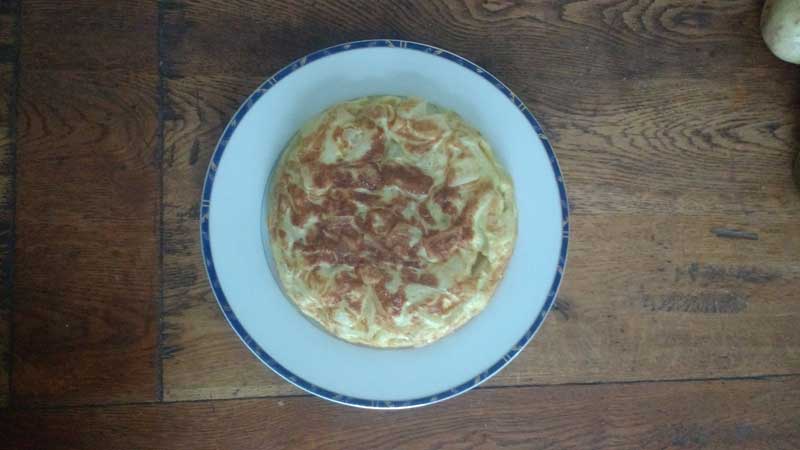 Maria is originally from the United States and grew up with a food culture that combined influences from both her Appalachian mother and Spanish father. She spent the 1990s in Barcelona, Catalonia, then moved to Cardiff, which has been her home for the past 18 years.