Britainâs midlife crisis and Walesâ decision to leave the EU 23.08.19

These articles by students from the School of English, Communication and Philosophy (ENCAP) at Cardiff University are commissioned and published as part of our sponsorship partnership with ENCAP

Cardiff University student Alexandra Banfi draws on Postcolonial theory and the historical legacy of quasi-colonialism in Wales to reflect on how delusions of imperial grandeur still inform Britishness, and how this fed into Walesâ decision to leave the EU. 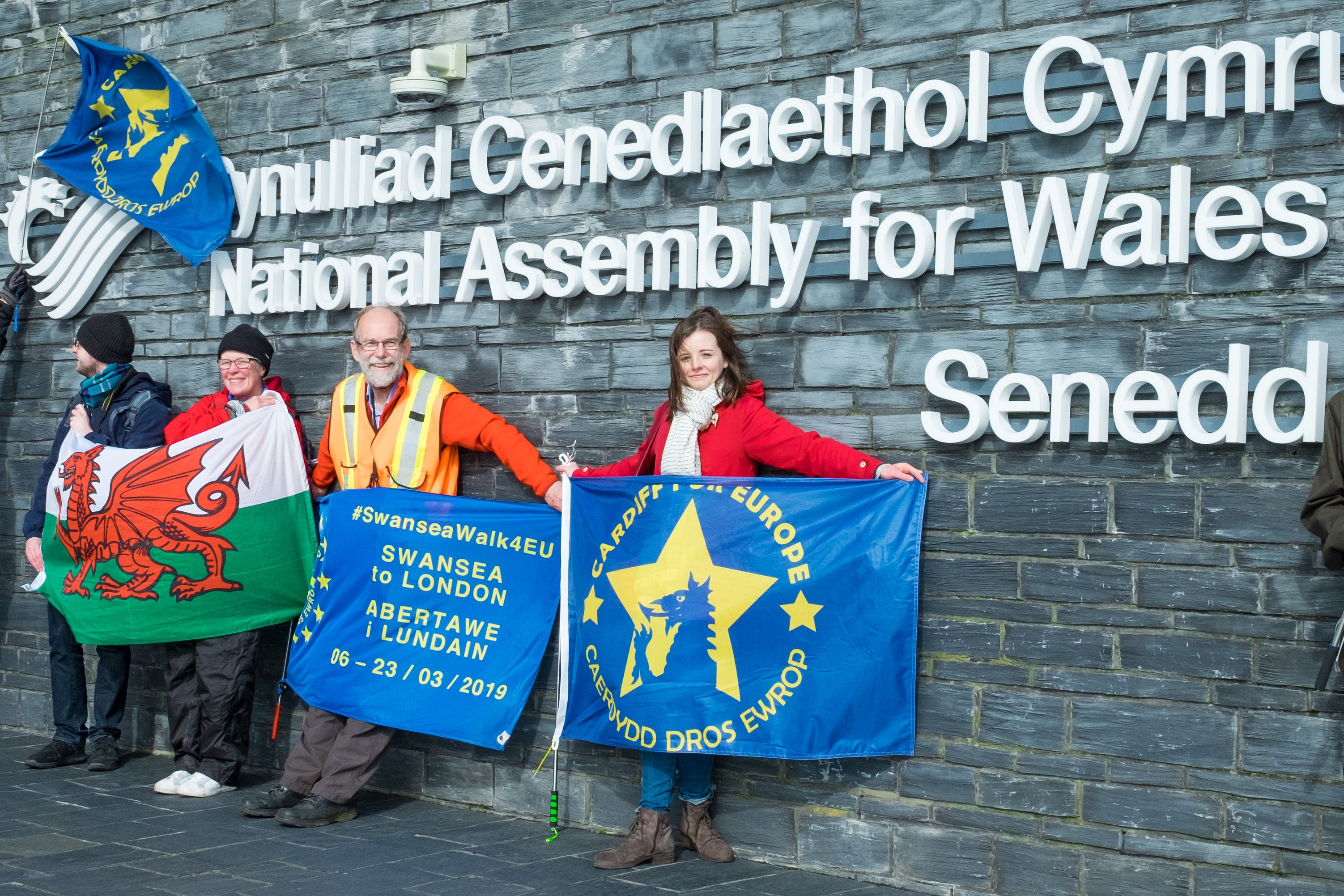 Britain lives in constant denial of its declining global supremacy, as it continues to entertain the illusion that the âsun never sets on the empireâ. Like a middle-aged man rebelling against his diminishing youth, Britain is suffering from a midlife crisis. Only instead of buying a convertible sports car, it has ejected itself from the social circle that reinstated peace in Europe as well as Britainâs somewhat powerful position in the global landscape. In an earlier issue of Planet, Hywel Dix considered Walesâ isolation from both Britain and wider Europe, but also the rising popularity of the Nordic Noir television genre and how this represents such an isolationist Welsh identity. Wales is largely unknown and, in some international contexts, its powerful neighbour overshadows its existence, as âEnglandâ becomes the collective name for âBritainâ. The word âWelshâ derives from the Germanic word for âforeignerâ, suggesting that Wales is regarded innately as the isolated other in British life.

Itâs perhaps strange then, that Wales decided to further isolate itself by leaving the EU and depending entirely on England for future development. Perhaps the answer lies partly in the misapprehensions and imperialistic illusions that have continuously been fed to the Welsh public, encouraging them to make decisions in the 2016 referendum that were not informed by the best interests of Wales. In particular, the widely circulated misinformation that Britain contributes Â£350 million to the EU every week. This was believed by many as it went largely unchallenged in the public domain. Yet the fact that Wales receives more funding from the EU than any other British country, Â£245 million more in funds than it pays in, to be exact, gained little coverage. It is not a question of whether the Welsh economy will suffer post-Brexit, but instead by âexactly how much1â. Much of the EU funding goes to the Welsh Valleys - an area considered one of Europeâs poorest regions. It is true that the UK government may continue these payments after leaving, but this is not certain. Departing the EU therefore risks some of Walesâs poorer regions falling into further deprivation. Many âLeaversâ have reiterated that the âBritain does not need the EUâ. While Britain may not âneedâ the EU, it is explicitly clear that it is in Walesâs best interest, financially at least, to remain in the EU.

This leads me to the main inquiry of this article; if EU membership benefits Wales so greatly, why did Wales decide to leave? If we work with Adam Priceâs assertion of Wales being Englandâs first colony (a contested concept also debated by academics Kirsti Bohata and Martin Johnes), Walesâs Brexit decision and willingness to follow England may be understood in light of subconsciously ingrained historical oppression.2 While Wales has not been a formal colony of England since 1542, Postcolonial theory illuminates many aspects of their relationship post-1542 that hint at quasi-colonial rule. This can be seen primarily in the Blue Books and the Welsh Not. The Commissionerâs Report, or the Blue Books, interpreted social upheaval in Wales as being due to the innate degeneracy of the Welsh population. The report attacked the language, but also the moral compass of the Welsh people. The Blue Books suggested that in order to cultivate socially acceptable Welsh citizens, they must become replicas of the âcivilisedâ English citizen, primarily through education. As a consequence of such an ideology, The Welsh Not entailed the punishment of children (often through beating) for speaking Welsh in schools. These are merely two examples of how the demonisation of the Welsh language and culture has, for many families, pushed their heritage into oblivion. We can begin to understand Walesâs decision to leave the EU as a possible product of deep-rooted oppression and an isolated mindset stemming from quasi-colonial treatment. While both the Blue Books and the Welsh Not are examples of historical oppression, it goes without saying that the tremors of this exploitation, disrespect, assimilation, and the coercion of the Welsh into adopting homogenous English identities are still felt today. This phenomenon is most noticeable in the loss of native Welsh speakers through out-migration (who often canât afford to live in their native country due to house prices pushed up by wealthy English in-migrants), the lack of political agency, and the inadequacy of the Welsh media.

While this article assumes Wales to be a colony, it is imperative to distinguish between the varying degrees of colonisation. To say that Wales suffered from colonialism in the same way that India did, for example, is incorrect as Wales remained somewhat complicit in Britainâs dreams of a glorious empire. However, Wales was still degraded by the English, through similar mechanisms to that which they used in other countries of the Empire, in turn restricting Walesâ cultural importance. As mentioned above, such ideologies still dictate Walesâ treatment and value within wider Britain. Controversy was rife earlier this year after the vandalisation of the âCofiwch Drywerynâ memorial near to Llanrhystud. The memorial, created by Meic Stephens, commemorates the village of Tryweryn and their plight as they endured flooding by Liverpool City Council to facilitate the creation of a reservoir. The destruction of such a cultural monument may be attributed to innocent ignorance toward Welsh history, but it also may be symbolic of a wilful dismissal of the importance of commemorating the destruction of Welsh heritage and homes. Either way, the nonchalant rejection of Walesâ history suggests that quasi-colonial attitudes still pertain. The recent decision by EDF to dump ânuclear mudâ off the south Wales coastline, exploiting Wales as a peripheral dumping ground , in order to build the nuclear power station Hinkley Point C also caused great controversy. Many activists are unsatisfied with the lack of extensive testing into the safety of the nuclear mud for the environment and people in the surrounding areas. This illuminates yet another example of the increasing lack of regard for Walesâ people, culture, or landscape.

Another, not necessarily contradictory, factor in why Wales decided to leave the EU, could be a product of Welsh complicity in Empire. The Welsh may share illusions of grandeur, as a consequence of their prior colonial power in the British context, the idea of accepting rule from the foreign adversary in Brussels is thus not possible. Yet while Wales cannot be considered a colony in the same way that India was, due to their complicity, the above discussion has demonstrated that colonial phenomena may shed some light on Walesâ decision during the referendum. Mimicry, in particular, is an often-analysed notion in Postcolonial Studies, particularly in Homi Bhabhaâs essay Of Mimicry and Man.3 It was believed that mimicry became a necessary mechanism through which the colonised could increase their social acceptability. This is true for Wales. Arguably, Welsh identity is a mimic of English identity for many reasons, in particular their close proximity and the dominance of the English narrative in the mainstream media. But also because historical quasi-colonial oppression, such as the Welsh Not and the Blue Books, may have encouraged an internalisation of the imposed inferiority attached to being Welsh. It is possible that despite such oppression being cemented in history, this mimicry is now ingrained within the modern Welsh psyche. It is debatable that this may have had a major impact on Walesâ decision during the 2016 referendum; a decision based on the seeming best interests of England.

As a former powerhouse, Britain cannot accept invisible rule from across the Channel. Instead it has chosen to follow the rise of nationalistic, right-wing politics globally and isolate itself in illusions of grandeur and naÃ¯ve glorification of its colonial past. Wales chose to agree with this narrative, blinded to the great benefits the EU provides them with. Viewing Brexit through a postcolonial lens has revealed that years of historical oppression may have become ingrained in the Welsh psyche to the point that we invest too much power and trust in England. As the National Union of Journalists suggests, if Wales is to be a strong democracy, it must have a stronger independent press.4 We are susceptible to continuing to be subconsciously constrained by the best interests and values of England because of the lack of independent media outlets informing the Welsh public sphere. It is possible therefore that we may continue to mimic the English, not because we want to, but because we know no other way.

Taffy is a Welshman,
Taffy is a fool.
Taffy voted no, no, no
when they offered him home rule.

Six days a week upon his knees
Taffy dug for coal.
On the seventh he was kneeling, too,
praying for his soul.

And now the mines are closing down
and chapel's had its day,
Taffy still lives upon his knees,
for he knows no other way.

An extract from âTaffy is a Welshmanâ by Alun Rees.

Alexandra Banfi is studying for a BA in Journalism, Media and English Literature at Cardiff University.

âIâm not lazy like those peopleâ: How austerity rations our compassion

Reflections from the Wales Coast Path: Penrhyndeudraeth to Harlech